So Dustin had the great idea of buying PVC pipe to make our backdrop holder. With one trip to Lowe’s, and a few cuts with their handsaw, we were home with an assembled frame that cost $22! Here’s a picture, although there’s crazy lens distortion, so it doesn’t look level. It is. And those are our cheapo constant lights. We can’t get rid of them though, because they do have nice bulbs… 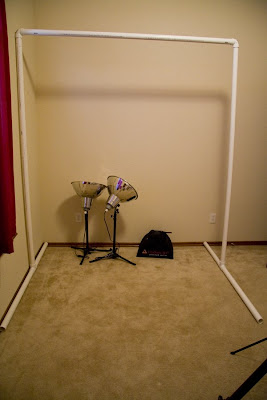 So next we bought 4 yards of black velvet (it catches the light completely– that’s how you do those infant black pictures) and industrial strength velcro, and voila! (French speakers, did i spell that right?) My whole family speaks it, but i gave up a long time ago. Although now i can communicate with an almost-3 year old! We miss you Niko.

Anyways, here’s a design of us, and pretend it extends down to include corban’s head. Warning: no makeup was used in the production of this shoot, and thus i look terrible. Pretend i have pretty hair and makeup. But we got the hair light working, and it turned out nice for test shots. This is going to be a product we’re going to offer families– a strongly vertical large print (or horiz if they prefer) 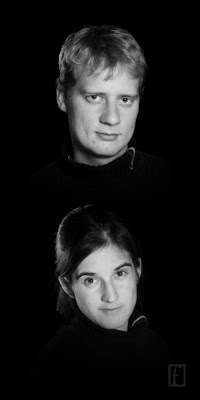 Stay tuned for the real deal later this week.

Born in Denver, CO and raised in Upstate New York, I have traveled the world and now happily live near Mullica Hill, NJ in South Jersey with my 3 boys and baby girl on 4 acres of woods. I've enjoyed shooting since 2001, officially becoming a business in 2006. Although photography brings me much joy, I try to find ways to craft and create in other mediums too!